The purpose of this page is to share news of new and recent publications of note. You can find publications by month and year in the menu bar to the right. You can also search for an author or title.

To begin, we have listed recent books and anthologies by our members, including a short feature on Michael Pisani’s new study.

Michael Pisani – Music for the Melodramatic Theatre in 19th-Century London and New York Studies in Theatre History and Culture (University of Iowa Press, 2014). 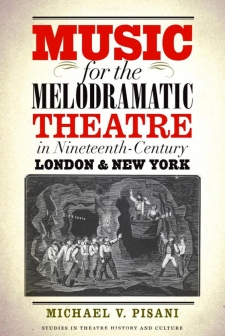 In the past decade, in a shift that reflects well the advance of interdisciplinary study, research on melodrama in every medium and context has finally begun to recognize the fundamental importance of music to the history of the form.  More than merely melodrama’s nominative root, music, we now see, is its lifeblood—the current that shapes affective appeals, drives the heightening of sensation, binds together action in clear lyric shape, and imbues mute scenic progress with feeling, emotion, and moral sense.  Yet, until quite recently we have known comparatively little about the origins of music for melodrama, and even less even about its first full century of development on the melodramatic stage—that era in which all of music’s melodramatic capabilities first evolved.  In fact, the music of stage melodrama, despite its profound significance and interest, has until recently been a virtual terra incognita, powerfully illuminated here and there by theatre scholars such as Michael Booth and David Mayer, but for the most part unknown and unstudied.

Michael Pisani’s landmark work changes all of this, offering a magisterial, richly illuminated history of music for melodramatic theatre from its origins to the early twentieth century.  Pisani enlists dozens of musical and theatrical examples, unearths a wealth of archival material, and details not only the manner in which music was used to shape, structure, and drive melodrama as a form, but the rich collaborative processes that achieved such effects in theatrical practice.  Mayer has described Music for the Melodramatic Theatre as “an immensely brilliant scholarly work that should be compulsory reading for anyone interested in the nineteenth-century theatre.”  So too should it be for anyone interested in music and melodrama today.

While Pisani’s study provides the first extended history of music for the melodramatic stage, it joins a growing tide of new work on early melodramatic music that complements its history and deserves much wider attention as well.  Sarah Hibberd’s groundbreaking edited volume, Melodramatic Voices: Understanding Music Drama (Ashgate, 2011), traces the influence of the melodramatic aesthetic in nineteenth-century music drama at large.  While Pisani looks in, Hibberd and her contributors look out, in essays on opera, musicals, and film that illuminate and highlight melodrama’s wide-ranging impact on musical culture in both the nineteenth and twentieth century.  At the same time, a now-substantial body of scholarship (including work by Katherine Astbury, Jens Hesselager, and Jacqueline Waeber, all of whom contribute to Melodramatic Voices) has advanced our understanding of the 18th-century origins of melodramatic music and reminded us of the genealogical indebtedness of melodrama to musical and not only theatrical culture and form.  As the 2013 King’s College conference on The Melodramatic Moment attested, interdisciplinary as well as musicological interest in melodrama’s 18th-century musical roots is now intense, and we should expect in coming years a surge of new publications on the topic—one that will undoubtedly both enrich and challenge our understanding of what melodrama is and how it was formed.

To read more about or to order Music for the Melodramatic Theatre in 19th-Century London and New York go here.

“Melodrama in Contemporary Film and Television” by Michael Stewart – July 18, 2014