Melodrama and Class Performance in Cama adentro by Jorge Gaggero

by Maria B. Clark

The analysis of the Argentine film Cama adentro (2004) focuses on melodramatic elements and cinematographic strategies for the dramatization of class performance. The drama unfolds in the context of the country’s economic crisis that reaches its climax in 2001 when the bourgeois world of the businesswoman Beba crashes down with her realization that she is not better off than her maid who has not been paid by her for months. By applying Judith Butler’s concept of gender-a construct dependent on the habitual repetition of performative acts-to the concept of social class, it is possible to examine the melodramatic aspects of the film as a vehicle for the performance of class by both characters.

Travel films, melodrama and the origins of ethnofiction
by Paul Henley

Compared with the films produced by academic anthropologists, which were modest in both scope and technical complexity, or even with those produced for museums or for empire- and nation-building purposes, the films of ethnographic interest made during the first half of the twentieth century by film-makers working for commercial production companies were generally much more imaginative and technically accomplished. In order to make their films accessible to a popular audience, far from eschewing authorship, as anthropologists of the period sought to do, these commercial film-makers had no hesitation in authoring their films. Ironically, a number of these commercially produced films have been claimed, retrospectively as it were, as masterworks of early ethnographic cinema and are now much more frequently watched and discussed, even in academic contexts, than the films made over the same period according to the self-denying ordinances of more academic ethnographic film-makers.

In this chapter, after a preliminary section discussing the very earliest examples of films concerned with culturally exotic subject matter produced by the Edison and Lumière production companies, I consider how two commercial entertainment genres – the travel film and the melodrama set in an exotic location – constituted the cinematic crucible out of which emerged three films that are often referred to as major milestones in the history of ethnographic film: Grass , In the Land of the Head Hunters and, most important of all, Nanook of the North .

There will be a production of The Octoroon by Branden Jacobs-Jenkins at Kean University from October 11th – October 19th. Tickets are available here: Kean Stage
From the website:

FOR MATURE AUDIENCES ONLY, if it was a film it would be rated R.

“Strange as it seems, a work based on a terminally dated play from more than 150 years ago may turn out to be this decade’s most eloquent theatrical statement on race in America today.”– Ben Brantley, New York Times

Broadly adapted from Irish playwright Dion Boucicault’s The Octoroon, a wildly popular 19th century melodrama, Jacobs-Jenkins’ transgressive comedy/tragedy is a subversive mash-up of the antebellum south and 21st century cultural politics. The playwright dares the audience to examine racism and..

“The Colored Angle”: Contending Visions of Imitation of Life

in Visible and Invisible Whiteness : Ame

A comparative analysis of the 1934 John M. Stahl film Imitation of Life and émigré director Douglas Sirk’s 1959 version allows for a more precise definition of how visible and invisible whiteness can be defined and represented in the cinema. The chapter argues that by looking at Stahl’s decisions concerning the generic structures he uses throughout the film, the visibility of whiteness that dominates in the first half of the film is rendered invisible by changing the guiding genre of the film from melodrama to romantic comedy halfway through the film. The chapter equally argues that Sirk’s focus on “the colored angle” allows for a different perspective on cinematic representations of white supremacy.

In April, the French publication Theatre History Review published a journal on the melodramatic actor. The summary in French follows: 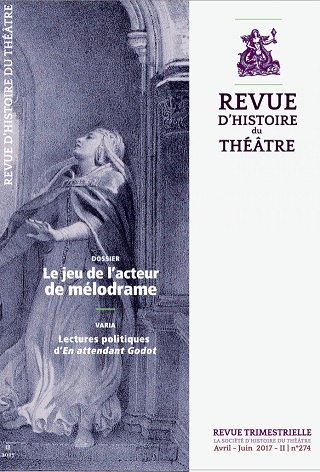 I Want My New Music Television: The Emerging Field of Popular Music and Television

From Empire (2015–), to Vinyl (2016), to Lip Sync Battle (2015), to Grease Live! (2016), television in the United States seems preoccupied with remaking, reperforming and reimagining the histories and myths of popular music. This panel seeks to survey the recent landscape of popular music-centric programming on television, across network, cable, and online platforms, and outside of considerations of the music video or soundtrack. This varied field encompasses multiple genres, such as comedy, melodrama, period drama, documentary, musical, and reality singing competitions. Like intersections of film and popular music, these post-network era programs often bank on the star power of established celebrities in the music industry, big-budgets, and/or Oscar-winning directors.

This panel is particularly interested in interrogating how popular music on television is especially productive for examining representations of race, class, gender, sexuality, nationality, and industry. A secondary goal is to examine how televisual narratives negotiate and play with music genres and histories, in ways that operate as nostalgically pleasing, but conversely, may also be off-putting to their built-in audience of music fans. Collectively, this panel aims to answer how and in what ways does such programming reinforce and/or criticize the conventions and codes of the popular music genres, and the texts and tropes that they depict.

Suggested programs and specials (but not limited to):

Period drama (The Get Down, Vinyl, Sun Records)

Proposals must include an abstract (2500 characters/250-300 words); 3-5 bibliographic sources; and a brief biography (500 characters/50-100 words).  Please email your proposal to Kristen Galvin by August 11, 2017 (kgalvin@scad.edu). A response will be sent to all submissions by August 15, 2017. Selected submissions and contributors will also be considered for inclusion in an anthology.